CommunityIn Less Than a Year, Mark Leveled Up His Career From Tech Support to Web Developer

From a young age, Mark had an appreciation for computers. But, it wasn’t until his late 20s – when he began to see what could be done online with modern technologies – that the web caught his interest.

Mark was then approached by a friend to help build a basic PHP application. Based on online resources, Mark was able to cobble together code for the app. This experience introduced Mark to a love of programming and the aspiration of becoming a developer.

Mark chose Treehouse for its interactive learning style. He started his free trial and dove into the PHP courses. Fast forward a few months, and a position opened up on the dev team where Mark worked. He was encouraged to apply by his peers and was immediately offered the job. Mark has been confidently working as part of the team ever since.

We caught up with Mark to hear more about his learning experience, leveling up his career, and his plans for the future. 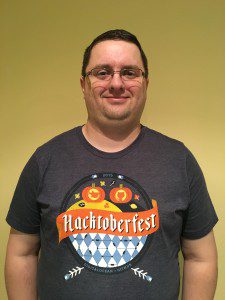 I firmly believe it was finding Treehouse that put me on track to getting where I am today.

I got my first introductions to the Internet back in 1995 at age 11. An Internet cafe opened in my town that had 4 machines, each with their own dialup modems. In saying that, I didn’t start seeing the possibilities that the Internet offered until around 2004. I was 20 years old and in love with computers. Due to this, it was assumed that I knew how to make websites and was asked to make one for a youth group I was part of at the time. Things didn’t go well and I abandoned the project shortly after. Fast forward to 2013 and I was living with my wife and son in the middle east. A friend asked me to help him with an online visitor database, and my interest in the web bloomed when I saw just what could be done with the modern technologies that we didn’t have previously.

At the time, I was working in a remote tech support role for a US based web hosting company. A friend outside of work asked me for help on a project he was building in Joomla (PHP CMS) and I quickly realised I knew nothing about Joomla or PHP, but I wanted to learn more. I spoke to my friend about what I was thinking and before I knew it I was looking up tutorials on how to put together a basic PHP application.

When I finished that application using cobbled together code from a range of sources, I realised how much I enjoyed programming but needed to find some proper resources for learning. After searching online, I came across Treehouse and more or less instantly signed up for a free trial. One of the first things I did was to start working on the beginners course for PHP. I quickly finished that and moved on to the more advanced course. I also dabbled with some front end courses as well to try and get some understanding of web design, even if it was just how to use Bootstrap.

Tell us a little about how your career has evolved since learning with Treehouse and the work you’re doing now.

As I was working through the PHP material on Treehouse, I was also building some applications of my own from scratch in PHP. I started out with a simple blogging platform that served as my personal website before I decided to level up a bit and try working with the Laravel framework. Once the blogging platform was finished (well, code is never truly finished) I started working on a customer management system for freelancers that sadly has now gone stagnant.

I also got talking to the lead developer at work about various issues I was coming up against. After a while, a vacancy on the dev team at work opened up and I was encouraged to apply for it. To my shock, I was offered the job and started right away. That was back in October 2014 and I have been working on the same dev team since.

One of the biggest tasks I’ve undertaken was to help craft a significant upgrade to our main portal. That was quickly followed by taking a lead role in migrating one of our brands from a legacy, self-designed billing system to the same commercial software that we use throughout the company. This involved creating a number of modules and hook scripts from scratch as well as assisting with getting the design looking just right and inline with the existing site design.

Outside of work I have even started to contribute to open source projects so that I can give back to the PHP community some of what I’ve learnt. I took part in the 2015 Hacktoberfest event and managed to get in the prerequisite 4 pull requests (I think I might have got about 10) in order to earn their stylish t-shirt.

I firmly believe that it was finding Treehouse that put me on track to getting where I am today. I had spent a fair amount of time looking for suitable learning material but most of what I was finding seemed far too advanced for a beginner and caused me to start questioning if I was smart enough to get into a developer role.

I’ve never been the type of person that learns through the typical teaching method of being talked at and then sitting, reading books for hours on end. For me, learning needs to be interactive. I’ve lost count of the number of times I’ve paused and replayed sections of a video on Treehouse to make sure I’ve heard/seen something correctly. Alongside the great videos I also find the short quizzes ideal for me, they force me to think about what was gone over in the previous video(s) and often point out areas that I maybe need to go over again.

Through these two main learning methods, not to mention the excellent Community and workspaces, I have learnt quite a lot, not just how to do something in a particular language but also the core skills required to be a web developer/programmer. Skills like critical thinking and problem solving that can be hard to master especially if that’s all you’re trying to learn.

Until recently I have primarily focused on only writing PHP code. However, I have been working through some front end development courses and getting familiar with CSS and JavaScript. I believe in this day and age it’s best to have a broad skill set and not just focus on front or back end development. My main goal for 2016 is to become comfortable with front end development and also possibly pick up another server side language, most likely Python.

Don’t give up! There will undoubtedly be times when you are stuck and don’t know how to get past something. The best things to do at times like that is to reach out to the community. The Treehouse Community is a fantastic source of assistance from others who are either in the same position as you or have been there before. Ask, it’s that simple.

If you are ready for a career change, sign up for a Free Trial with Treehouse!

2 Responses to “In Less Than a Year, Mark Leveled Up His Career From Tech Support to Web Developer”